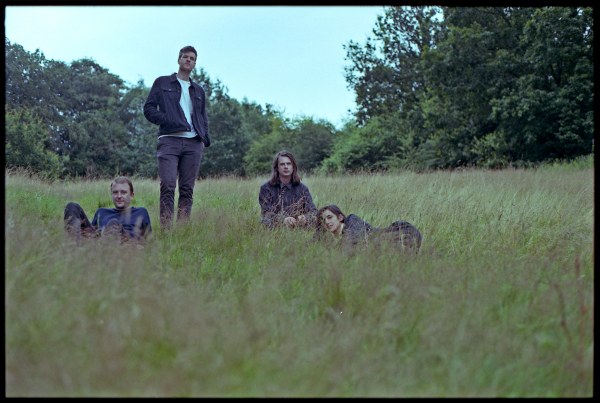 On February 21st, Spinning Coin will release their second album Hyacinth via Domino imprint Geographic. A brave step forward, Hyacinth is an album full of poetry, light and warmth of heart, and presents a band holding nothing back. It registers a number of changes for the group since their debut LP Permo in 2017: personnel changes, geographical changes, a new context, an ever-changing world outside.

Today, Spinning Coin are pleased to share the first song from Hyacinth born of this new set up, “Feel You More Than World Right Now”. With an animated video directed by Joseph May, the new track comes penned by Armstrong – now one of three songwriters in the band alongside Jack Mellin and Taylor.

Throughout Hyacinth, there is joy in spades, but also melancholy, and a checked fury, threading the group’s political vision through their reflections on the personal and the interpersonal. Jack explains that the new songs “are about the need for love in an often very unloving world. Trying to find a balance of some kind between feelings of apathy, negativity, detachment and action, positivity and oneness.” Whilst Mellin’s songs were more pointedly political on Permo, here he has built more complexity into his writing. Elsewhere, Rachel contributes her first song to a Spinning Coin release, in the form of the harmonious “Black Cat”.

Hyacinth was recorded during a few days, by Peter Deimel at Black Box Studios in France, while the group were on a summertime tour. It was an idyll, a restorative respite. That feeling carries through to the album—there’s a sense of society and collectivism at the heart of these pop songs, and a commentary on the optimism of the will, no matter how bleak things can get. Ultimately, on Hyacinth, the Spinning Coin ethos stays true to itself, as Sean expands about the experiences and the motivations behind the new music: “It’s trying to connect with other people on a human level, doing something that we love, and trying to embrace the unknown.”

"the romantic tropes of indie pop made malleable to fit Spinning Coin’s struggles with money, love, and alcohol. They do it all effortlessly, and therein lies their charm." BANDCAMP

"a dash of the abstract, a lot of jangly-but-forceful 1992-era Ride, and a not small amount of skillfully employed pedal effects." FLOOD