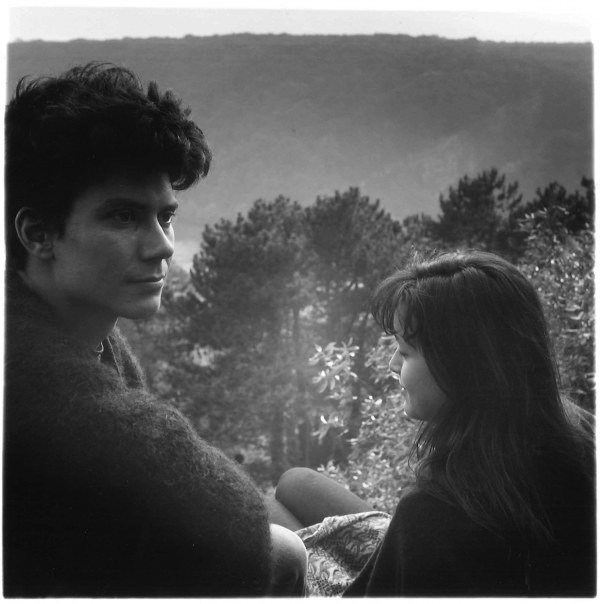 When West Country feedback merchant Dave Pearce resurfaced in 2015 with his first new music in more than a decade, it provided the ideal opportunity to introduce his out-of-print back catalogue to a whole new audience. Following the excitement generated by the  re-release of Further, Chorus and Distance last year, Domino are reissuing three more of his peerless early works – the self-titled debut, New Lands and Mirror – available on the 14th of April, 2017.

Flying Saucer Attack’s self-titled debut album, released in 1993, was commonly known as ‘Rural Psychedelia’ – an apt description for the rough-hewn soundscapes they crafted. These bedroom recordings made a virtue of the otherworldly, hissy mechanics of four-track cassette-to-vinyl duplication. Pearce realised that you didn’t need to layer 16 guitar tracks in an expensive studio to make a big noise. Recording directly on to a four-track resulted in a thick, distorted, abrasive sound that suited his needs perfectly.

New Lands, released in 1997, was album proper No 3, described by Pearce as “phase two” of the FSA project. It found Pearce operating alone and finally realising the guitar sound that had been in his head all along. “Something like AR Kane’s god-like Up Home!,” he revealed in an interview at the time. It was a stark and often challenging listen (Pearce stated in one interview that it was originally going to be called Fuck You!), yet utterly beguiling.

Mirror would turn out to be Pearce’s final offering as FSA for 15 years, but at the time of its release in 2000 it felt like the start of something exciting and new – it was seen in some quarters as one of the first great records of the millennium. Sonically, it was Pearce’s most accessible and melodic album. “His sombre, acoustic folk still recalls the gentle melancholy of Nick Drake,” said the Pitchfork review, “but for the first time, the melodies and lyrics can be clearly deciphered.”

This move into thrilling new sonic territories should have pointed the way forward for Pearce – instead, until his surprising comeback, it was a full stop on a brilliant and idiosyncratic career.

This is the first time that FSA and Mirror have been released by Domino. FSA vinyl will be available in a board mounted ‘tip on’ gatefold sleeve.  The artwork for Mirror is replicated from the original Flying Saucer Attack edition.  The albums will all be available on heavyweight vinyl (with download cards), CD & digital formats.