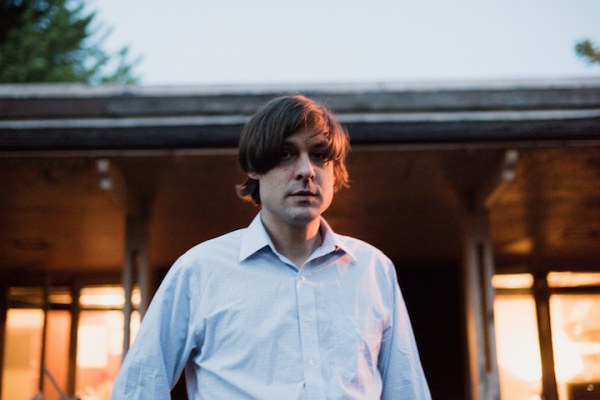 The inimitable John Maus returns with his fourth full-length album, Screen Memories, out on Ribbon Music on October 27, 2017. Today also marks the announcement of a six LP box set compiling all of John’s work, most of which is out of print, plus an additional brand new studio album entitled Addendum, the vinyl version of which is exclusive to the limited box set. The box set will ship to arrive the week of April 16, 2018.

Screen Memories opening track “The Combine” is released today, in which Maus intones with an apocalyptic stateliness, “It’s going to dust us all to nothing, man. I see the combine coming.” “The Combine” sweeps through with a bracing baroque charm, all towering spires of glistening augmentation, swirling counterpoint and sonorous vocals.

It has been six years since We Must Become The Pitiless Censors Of Ourselves appeared like a thunderbolt of maniacal energy and turned everyone’s heads around. After touring in support of the album, releasing a collection of rarities and unreleased tracks, Maus receded from the public spotlight, returning to his academic pursuits. Years later, after completing his doctorate in Political Philosophy, he began building his own modular synthesizers, etching the printed circuit boards, soldering components, and assembling panels, until he had an instrument that matched his vision.

His music is a highly mutable affair. Whilst often described as retro-futurist on behalf of the 80’s drum machines and synth sounds employed, John’s music is more personal than the nostalgic re-tread implied. He’s more interested in seeking cadence, through his love of Renaissance polyphony and the experimentation behind post punk. It’s an amalgamation of musical ideas as radical as its intent.

Screen Memories was written, recorded, and engineered by Maus over the last few years in his home in Minnesota, known genially as the Funny Farm.  It’s a solitary place situated in the corn plains of the rural American Midwest. The landscape is as majestic as it is austere and inevitably some of the sub-zero winter temperatures creep into the songs, as do the buzzing wasps of summer.

The limited edition John Maus 6 LP box set includes Screen Memories, and his previous 3 studio albums as well as a rarities compilation, all of which are out of print. The sixth item is a new LP titled Addendum that comprises 12 additional studio recordings and is exclusive to this box set release. The set also includes a 56-page booklet with essays, lyrics and never-before-seen photos. The box set is available to pre-order now, and ships in April 2018, with the Screen Memories LP shipping separately to arrive on its October 27, 2017 release date.