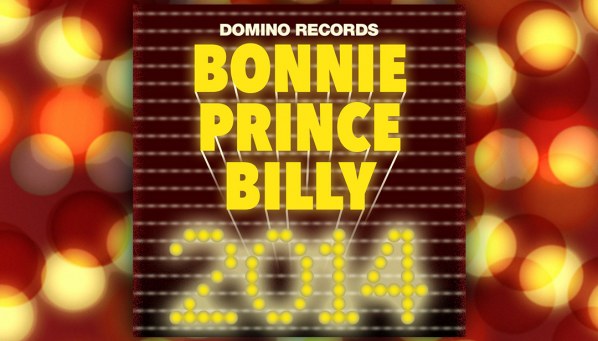 Strange things were happening in the world of the music business.  The music itself was still alive, but the bodies formerly inhabited by that music were being rapidly abandoned.  The music maybe was getting big-headed, thinking it could survive without a real host.  Regardless, it was getting eerily hostile.  Making new music for this environment was a challenge for Will Oldham, who had too much invested in the making of music to just let it run free in this lawless climate.  So Oldham continued to actively combine the making of new music with ‘old’.  There had been the Babblers shows and the Everly-honoring record and tours with Dawn McCarthy.  Now, for a new Bonnie ‘Prince’ Billy record of original songs, Oldham turned back the clock a few years, to 2011, and imagined that he had not made a record called WOLFROY GOES TO TOWN out of a certain cluster of assembled songs.  The songs were there, but time’s road was split and here Oldham took a different fork.  He left behind the two foreign-culture jams, “New Tibet” and “Cows”, and picked up the ostracized “Whipped” and “Out of Mind” along with a new Bryan Rich composition, “New Black Rich (Tusks)”, and built an alternate-reality record called SINGER’S GRAVE A SEA OF TONGUES.  The title was a paraphrase of one of the song titles from the record, “Sailor’s Grave a Sea of Sheep”, which was itself a paraphrase of the song “Black Captain”, Rashomon-ing the story for this new context.  Oldham asked Emmett Kelly if he was down for making a new record, Kelly said “oui, oui”, and Oldham sent Kelly a CD of demos featuring all of the songs to be recorded.  Oldham also sent a letter to the rest of the Babbler band (Danny Kiely, Ben Boye, Van Campbell, and Angel Olsen) as well as to Shahzad Ismaily explaining that this new record was in no way intended to be a slight on the WOLFROY achievement, rather perhaps a new way of shining a new light on that record and on recorded efforts in general.  The past was not past, it is a crucial part of the present and future.  Mark Nevers had asked Oldham to come make a new record, and Oldham brought SINGER’S GRAVE to the Beech House table.  Nevers met the challenge with fierce enthusiasm.  He brought in the McCrary sisters and Caroline Peyton to sing, Billy Contreras to fiddle, and the stalwart Tony Crow to play pianos and keys.

Claudia Crobatia made a video for “New Black Rich (Tusks)”, shot outside of Amsterdam and starring Oldham and Kelly.  Ben Berman revisited “Quail and Dumplings”, setting the new piece at a water park and bringing back Nina Nastasia and Kennan Gudjonsson as well as, of course, Zombie Bonny.  TV commercials were made for the record attempting to explain the phenomena of the parallel-reality recording.  Sammy Harkham once again, as he did on WOLFROY, executed the cover art.  The photo on the back cover (taken by Oscar Parsons) features Oldham on the stage of Clear Lake, Iowa’s legendary Surf Ballroom, the site of Buddy Holly’s final performance.