Today, Thao & The Get Down Stay Down announces the October 29 release of Temple - Deluxe Edition via Ribbon Music. The LP is a digital deluxe version of her latest album, 2020’s Temple, featuring acoustic and string arrangement versions of Temple tracks “How Could I,” “Marauders,” “Marrow,” and “Temple.”

With this news, Thao & The Get Down Stay Down have revealed a video for “Marrow,” directed by Linda Green, and  released “Marrow - Strings Version”. The clip narrates the song’s story of a woman compelled by love to heal herself so she can be a better partner.

Thao notes, ““Marrow” is a declaration, an apology, a release, and a love song. Until the album Temple, I had not explored nor cultivated the gift and the right of the pure love song, due to many external and internal barriers to me being fully out in my career. I wrote it just before my partner and I got married in late 2019. I knew from the beginning that "Marrow" would close the album; I knew I would need it to punctuate an end and more importantly, a beginning. I am so thrilled for "Marrow" to have its own visual life. Shooting this video helped anchor me even more in the love and resolve that propelled "Marrow." Endless thanks to director Linda Mai Green and her fantastic team for giving me the opportunity to physically do what I have been trying to figuratively get at for so long: destroy artifice and defense and false altars, tear away shame and guilt strip by strip, and to be light and free enough to join my life and love, already in progress.”

Listen to "Marrow - Strings Version" HERE & watch the new video for "Marrow" below.

Thao is currently on the road as support for Julien Baker, playing tonight at New York City’s Beacon Theater. Next month she will be performing on The Lantern Tour alongside Emmylou Harris, Steve Earle, and others.  Proceeds from that tour will benefit the Women’s Refugee Commission. Find full tour dates below.

Around the release of Temple, Thao & The Get Down Stay Down performed a session for NPR’s Tiny Desk which was partially the inspiration for the forthcoming Temple - Deluxe Edition.  Further, Thao recently landed on the cover of The New York Times’ T Magazine as part of their “The Asian Pop Stars Taking Center Stage” feature. They note, “Temple is Nguyen’s fifth album, and the first to bring her family background to the fore. ‘I had never addressed it in my work because I had never addressed it in my life,’ she says. When Asian American organizations approached her to perform, she turned them down. She didn’t want to acknowledge her sense of shame about her background. ‘It’s so hard to admit that you’re not above that,’ she says.”

This same sentiment was echoed in the short documentary Nobody Dies that Thao made about her first visit to Vietnam. Initially released in 2017 on PBS, it was made available for streaming on YouTube last October for a limited time. In an essay for The Talkhouse accompanying the online release, Thao says, “I came up in music at a time when emphasizing my ethnicity all too often meant being reduced or distilled to it, or offhandedly dismissed because of it, so I avoided my ethnicity as best I could. Avoiding it became a bad reflex. Fifteen years in, Temple is the first batch of songs wherein I acknowledge and honor my heritage.”

As much as Temple is about being proudly Vietnamese, it is also the story of Thao’s coming out as queer. In the same essay for Talkhouse, she says, “One evening in Saigon, after a family gathering, my mother said to me, quite out of nowhere: ‘You have to understand for yourself what it means to be free. You have to learn for yourself why a million people would risk dying at sea. What is it about freedom. I can’t do that for you. You have to learn for yourself.’...I remember wondering what that would mean for me, if I’d ever have the occasion to truly consider and learn what it meant to be free. This moment, four years later, became the heart and bones of the lead single ‘Temple,’ and thus, the entire album.” Thao also appeared on the Under the Radar Podcast discussing how she came out publicly as queer around Temple’s release, as well as how she is finally coping with the racism and homophobia she experienced growing up.

Thao’s groundbreaking video for “Phenom” was featured on CBS Sunday Morning’s “Sunny Awards” and The Washington Post labeled it “the first great Zoom music video,” while Variety called it a “brilliantly creative use of technology and choreography.” 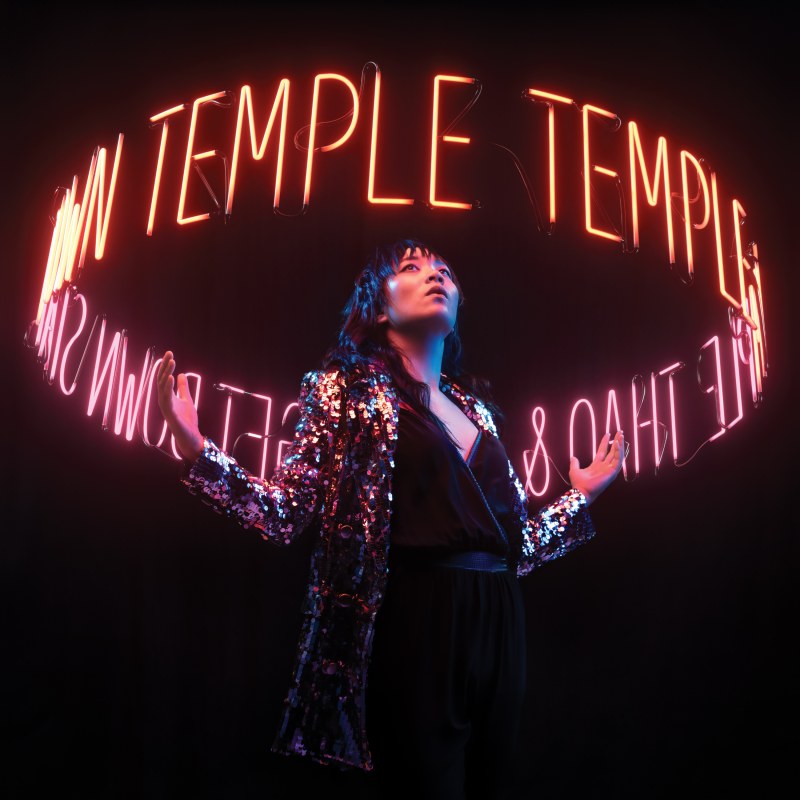 Thao & The Get Down Stay Down Temple

Temple is the fifth full-length album from Thao & The Get Down Stay Down. Produced by Thao and bandmate Adam Thompson, it is also their first self-produced album. Kaleidoscopic and danceable, grounded by Thao’s singular voice, Temple feels boldly dissonant while still highly accessible.

A temple is a place of worship and sanctuary. We spend our lives searching for temples where we can belong and be loved, but those spaces can also be a kind of confinement. Temple is an album that pushes open boundaries for a different kind of sanctuary, where you don’t have to whisper.

Thao & The Get Down Stay Down Temple

Temple is the fifth full-length album from Thao & The Get Down Stay Down. Produced by Thao and bandmate Adam Thompson, it is also their first self-produced album. Kaleidoscopic and danceable, grounded by Thao’s singular voice, Temple feels boldly dissonant while still highly accessible.

A temple is a place of worship and sanctuary. We spend our lives searching for temples where we can belong and be loved, but those spaces can also be a kind of confinement. Temple is an album that pushes open boundaries for a different kind of sanctuary, where you don’t have to whisper.