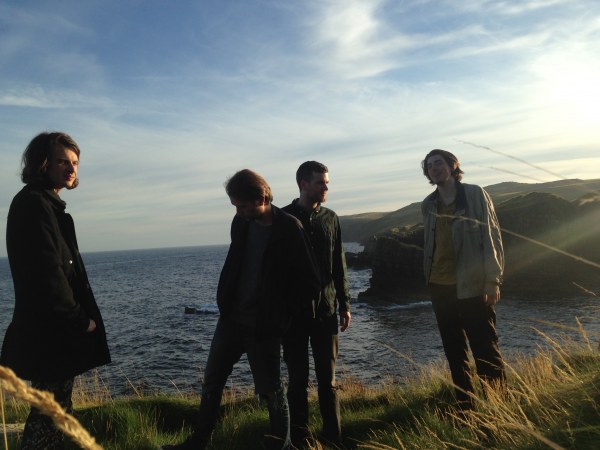 Glasgow’s Spinning Coin made their first impression on the world at large with 2016’s “Albany” / “Sides”, their debut 7” single on Geographic. A joyous jolt to the senses, it was also a call-to-arms for progressive politics, against the back-footed movement of right-wing bigotries. The quartet’s roots are in proudly independent music making, group endeavour and countercultural activism, and they’re sensitive to the ways this affects the art we strive to make.

With “Raining On Hope Street”, Spinning Coin reveal another, beautifully moving side to their song: it’s a heartbreaker, a gloriously affecting pop melody. In many ways Spinning Coin catch what’s in the winds of their times, and “Raining On Hope Street” understands the complexities of the heart along with the intensities of lived experience: it’s rich with compassion and warmth, a thread of love to weave around the thread of song Spinning Coin are working into the loom of modern life.

Tellingly, they’re part of a tradition of socialist independent pop from Glasgow, one with a strong history of DIY creativity against the odds, of making the most of what you’ve got in front of you, and of finding a way through the world by gathering like-minded souls around. They understand that the collective is the way forward, their 45s and cassettes as magnitizdat postings from the front.

Spinning Coin join fellow Glaswegians Sacred Paws on tour throughout February, including a stop at The Islington, London on Friday 17th February.