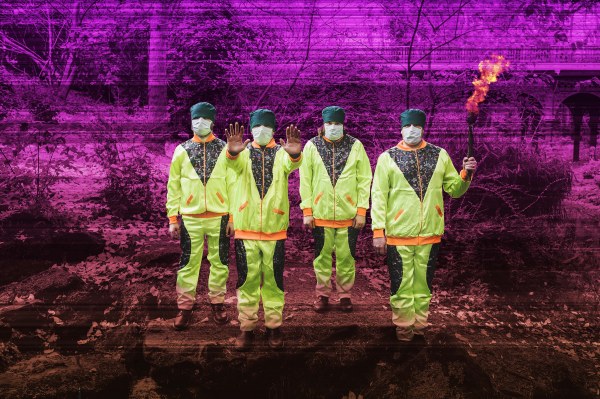 Hear ye, hear ye! Roll up, roll up! Welcome to Wheeltappers and Shunters! After an unprecedented seven year break, Clinic, Liverpool’s cherished post-punk pop experimentalists return with album number eight, released on May 10th, by Domino. The unusual name is taken from the long-forgotten 1970s ITV variety show The Wheeltappers and Shunters Social Club, compered by Bernard Manning, which recreated the smoky, boozy atmosphere of Northern working men's clubs for a sofa-bound audience.

“It’s been a pisstake thing between us for quite a few years,” reveals Ade Blackburn, Clinic spokesman, of the show that the album title references. “Whenever we’d talk about a song sounding too ‘cabaret’ or too nice, we’d say, ‘That’s a bit Wheeltappers and Shunters’.

This album is neither a celebration nor a denigration of the culture of the era in which Blackburn and his collaborator-in-chief, Hartley, grew up. “It’s a satirical take on British culture - high and low,” explains Blackburn. “It fascinates me that people look back on the 1970s as the glory days. It’s emerged that there was a darker, more perverse side to that time. When you look back on it now it was quite clearly there in mainstream culture.”

The first track to be shared from Wheeltappers and Shunters is ‘Rubber Bullets’, fifties rock’n’roll is the order of the day as Blackburn grunts “Neanderthal” over a twanging rockabilly guitar riff à la Scotty Moore.

The album was recorded last year in founding band member Hartley's Liverpool studio, before they brought in Dilip Harris (King Krule, Sons Of Kemet, Mount Kimbie) to mix it. “We thought it felt right to make a fun, dancefloor album in these dark and conservative times,” Blackburn continues. Fun, sure, but this is Clinic – their brand of fun oozes with menace.

The Great Britain that Clinic are evoking is not that ancient, bucolic past of village green cricket, half a mild and hanky-waving Morris Dancers that many seem so determined that the country should return to, but a rather more sleazy past. Clinic’s reverie is for a time when Blackpool was the pleasure capital of the kingdom and the public was kept entertained by travelling circuses and the dirty glamour of the funfair; tacky end of the pier merriment and enforced fun at Butlins; when bell-ringing town criers bellowed their nonsensical broadsides into the ether.

For most bands about to enter their third decade as an entity the well would be running dry, but eight albums in and Clinic still retain the ability to surprise. Clocking in at just over 28 minutes, Wheeltappers and Shunters is an absolute blast, rich in detail and sonic intrigue, those precious minutes stuffed with ideas. “We’d released albums like clockwork every two years, so it seemed natural to have a break,” Blackburn reveals. “It allowed everyone to do some quite oddball stuff, away from Clinic. I think we all wanted a bit more freedom.”

5. Ferryboat of the Mind

9. Be Yourself/Year of the Sadist

12. New Equations at the Copacabana