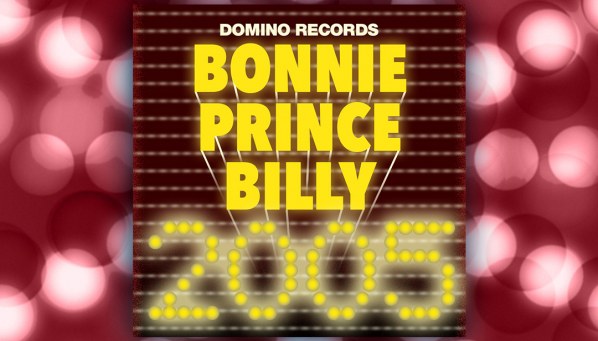 Smoke was clearing for Will Oldham from the elaborations of GREATEST PALACE MUSIC.  Digging into the older songs had a left a brain free and wandering.  For Matt Sweeney, a separate kind of smoke was dissipating, as a years-long musical collaboration with David Pajo and Paz Lenchantin had come to a close.  Sweeney had been string-tickling in another’s wheelhouse, and his own was getting restless.  Oldham had a solo show booked in London (England) and came up with a kernel of an idea, in the form of an email with the subject of “Challenge”: would Sweeney be able and willing to collaborate on some new songs in time to debut them at this London gig together, as a two-man effort? Say, three songs? So they woodshedded separately and came up with “Beast For Thee”, “What Are You” and “I Gave You” in time to perform them at Shepherds Bush Empire together. They were late getting to the show due to stopping to see their colleague David Blaine who was weeks into being suspended in a box without food for 44 days- Steve Gullick’s photo of Oldham re-stringing a guitar last minute in the taxi was no pose. Both men felt good about what they had done at the concert and figured to pursue this process further.  They met up again in New Orleans, performing many old songs and some new at the El Matador and holing up for days at the Frenchman Hotel to hash out more songs.  Days and weeks wore on, they scheduled a session with Paul Oldham at the farmhouse studio in Shelbyville, KY.  They toured their way to Shelbyville from New York, playing shows at Pete’s Candy Store in Brooklyn and Baltimore’s Ottobar.  Landing in Kentucky, they got down to business.  Pete Townsend was brought in to throw down drums on a few of the songs.  Friend Nicky Katt had strongly recommended that they watch the Vietnam vengeance movie ROLLING THUNDER, a suggestion that proved creatively crucial to “Blood Embrace”.  Artwork was rendered by Matt and his cousin Spencer Sweeney.  The poster for SUPERWOLF is a wax painting made by Brian “Babyleg” Deran.  A Calabasas-located music video was made by Mike Piscitelli for “I Gave You”.  The week of the album’s release saw two-man Superwolf shows at McCabe’s Guitar Shop, 2 sold out nights at Big Sur’s Fernwood Inn and an in-store performance at Amoeba Records on Haight Street in San Francisco. A CD single for “I Gave You” was released with an outtake from the SUPERWOLF session, “My Circle”, along with two new songs, “Birch Ballad” and “Four Screams”.  On tour, the ensemble would also perform a cover of the Walker Brothers’ “Inside of You”. The European tours around the album featured Alex Neilson on drums, Azita Youssefi on keyboards, Ben Chasny on guitar and Paul Oldham on bass. A psychedelicized headlining show at the Montreux Jazz Festival in The Miles Davis theater happened. There was a BBC session at the end of the tour with the Chasny lineup.

In the early 2000’s, a band from Alabama called Rainywood contacted Will Oldham, expressing an interest in playing some shows.  It was agreed upon to undertake a tour of the west coast of the USA, Rainywood and Bonnie Prince Billy, an all-camping, all-swimming, all-surfing and/or hot springing journey from Washington state to Solana Beach, CA.  A good time was had by all, and it was agreed that the following summer a similar trip be undertaken, this time through the mountains and deserts to the east of the previous year’s trek.  Rainywood morphed into Brightblack (and ultimately Brightblack Morning Light), the Bonny Billy band rotated musicians in and out and back again, and once again a good time was achieved.  It was on the first of these trips that Oldham came into contact with the musics of Faun Fables and Joanna Newsom, and it was on the second of these trips that Newsom and Dawn McCarthy of Faun Fables joined the bill for many of the tour’s shows.  2004 brought the third annual trip of this kind, this time rolling along the southern states of the USA from west to east, beginning in Texas and ending in North Carolina.  A split EP was recorded by Brightblack and Bonny Billy, called PEBBLES AND RIPPLES.  Brightblack gave Bonny three songs to cover and Bonny returned the challenge.  The Bonny band on this stretch featured David Bird and Matt Sweeney on electric guitars, Ryder McNair playing all keys, b singing and playing an acoustic guitar, with the powerhouse I SEE A DARKNESS rhythm team of Paul Oldham (bass) and Peter Townsend (drums).  Pink Nasty had arranged and recorded Bonny’s “May It Always Be” previously, and it was this rendition that she performed during this tour. Paul Oldham had to miss the final two shows and Aram Stith filled in on bass for those.  The previous years’ outings had been so fine and rollicking that Oldham invited engineer Kris Poulin along to record the shows, with the idea of making a live record out of the resulting recordings.  Will and Paul pored over the recordings for months after.  Will had thought to assemble the record from multiple shows, stitching the songs together into one flowing set.  Originally he’d thought to approach the piece like GET YER YA-YAS OUT (and most big live records from the previous decade or two), taking liberties with the idea of “live” by adding overdubs when the recording just didn’t translate.  However, they found the collection worked without more recording.  All of the manipulations had to do with selecting and sequencing songs from different shows to accommodate the new context.  The photographs on the cover of SUMMER IN THE SOUTHEAST come from a trip that Oldham took with Todd Brashear to Argentina.  Drawings inside were by Able Brown.  The record came out on Drag City’s ‘bootleg’ label, SEA NOTE.