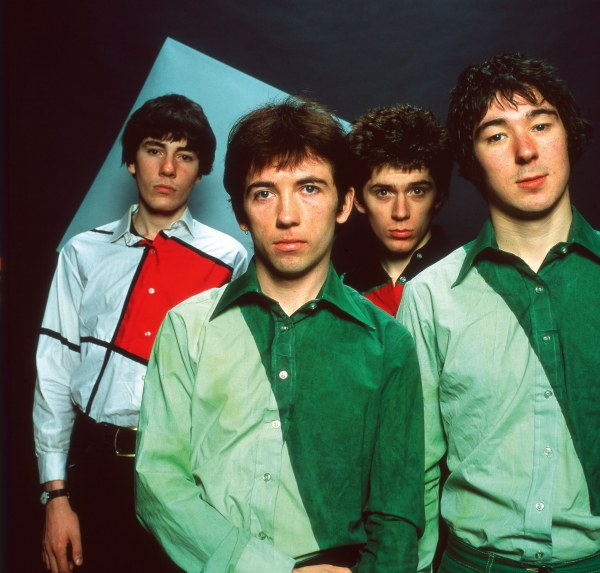 To mark the 40th anniversary of the original releases, Domino are very proud to announce details of the re-issue of Buzzcocks seminal first two albums, Another Music In A Different Kitchen and Love Bites, on Friday 25th January 2019.

Both albums have been lovingly restored and re-mastered from the original ¼” tapes for the first time and come packaged in the original Malcolm Garrett designed sleeves with lavish 8-page booklets containing unseen images and extensive liner notes by famed writer, broadcaster, music journalist and cultural commentator Jon Savage.

Faithful to their original track-listings, the re-issues see the albums released on vinyl for the first time in many years and they will be available on deluxe 180g vinyl and CD.

The albums follow the Domino re-releases of their debut EP, Spiral Scratch and Time’s Up, a collection of demos, from 1976.

Famously taking their name from ‘It’s the buzz, cock’, a headline from a Time Out review of 1970s TV music drama ‘Rock Follies’, Buzzcocks formed in Bolton in 1976 by Pete Shelley and Howard Devoto, who have a strong claim to have kick-started a musical revolution in Manchester having organised and played at the now famous Sex Pistols show at Manchester’s Lesser Free Trade Hall in 1976, a show which inspired and spawned the likes of Joy Division, The Fall and The Smiths.

Having recorded and pressed their debut EP, Spiral Scratch, in December 1976 for a cost of £500 (the single would go on to sell 16,000 copies in the first six months of release on their own New Hormones label), the band soon under-went personnel changes with founder Howard Devoto leaving before they signed to United Artists and embarked on the recording of their debut album.

Recorded at Olympic Studios in London between December 1977 and January 1978 with producer Martin Rushent and featuring the line-up of Pete Shelley (vocals / guitar), Steve Diggle (guitar / vocals), Steve Garvey (bass) and John Maher (drums), Another Music In A Different Kitchen was released in March 1978 featuring a distinctive cover by Malcolm Garrett whose work would become inextricably linked with the band.

Within six months of their debut album release, the band had recorded and released its follow up. Again working with Martin Rushent at Olympic Studios, Love Bites was recorded in late July 1978 and released in September of that year. Reaching number 13 in the U.K. album charts, it featured their highest charting single, and arguably best-known song, Ever Fallen In Love (With Someone You Shouldn’t’ve).

ANOTHER MUSIC IN A DIFFERENT KITCHEN

11. Moving Away From The Pulse Beat

By the end of 1978 with the release of these albums not only had Buzzcocks established themselves as one of the leading-lights of punk but proved themselves as deft songwriters capable of producing three-minute-mini-masterpieces that would endure long after the initial spark of punk had faded.

After releasing a third album, A Different Kind Of Tension, in 1979 the band continued for a couple of years before finally disbanding in 1981. The band would re-form in 1989 for a number of shows and they have continued to play live and record albums since featuring original members Pete Shelley and Steve Diggle.

2.   Ever Fallen In Love (With Someone You Shouldn’t’ve)