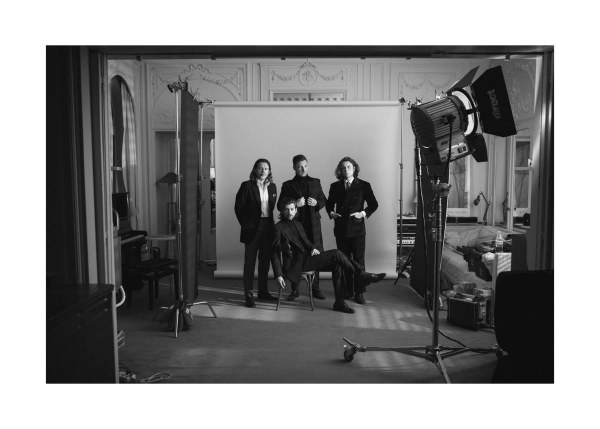 Arctic Monkeys have teamed up with Centrepoint, the UK’s leading youth homelessness charity, to auction 12 limited edition, framed prints of the band, signed by both the band and photographer Zackery Michael.

The auction of prints taken by Zackery Michael of previously unseen photographs of the band taken during the making of and tour surrounding the current album, Tranquility Base Hotel & Casino will go live on Tuesday 25th September at 9am via www.charitystars.com/arcticmonkeys.  The images have been exhibited in London and Sheffield whilst the band has been touring.

The collection features photographs shot between November 2017 and August 2018.  Michael documented the recording  of  Arctic Monkeys’ sixth album, Tranquility Base Hotel & Casino; toured with the band and captured unique moments along the way.  As a photographer, Zackery Michael looks out for his friends: observing and appreciating and, in the process, eliciting something true. And so, in his travels around the world with his camera and the band -- Alex Turner, Jamie Cook, Nick O’Malley and Matt Helders -- Michael has created a body of work that celebrates not only their creativity but also their camaraderie. “They are more than the Arctic Monkeys to me,” he says. “These four gentlemen from Yorkshire are my friends. The images exhibited are a very honest portrayal of that friendship.”

The auction will be run by Centrepoint’s online auction company Charity Stars.

• Centrepoint supports more than 10,000 homeless young people a year directly in London, Manchester, Yorkshire and Sunderland, and through partner charities across the UK.

• Centrepoint’s work is about more than just providing a safe bed for the night; Centrepoint helps young people to turn their lives around by gaining essential life skills; tackling their physical and mental health issues and moving into education or employment.

• Through policy work, Centrepoint aims to influence public policy, campaigning on behalf of the young people it supports and homeless young people throughout the UK.

• HRH The Duke of Cambridge became Centrepoint’s Patron in 2005.